All too often, development teams think they have to change their missions and the work of their organizations to fit a funder’s vision. I think everyone would be well-served to remember the following: nonprofits have missions, foundations have missions of their own, and it’s okay that those missions don’t always align with one another!

I’ve experienced this problem in extremes — on one end of the spectrum, grantees overextend themselves in an effort to secure funding. On the other end, grantees remain firm and set boundaries around their work, regardless of how it might impact the bottom line in their relationship to a funder.

One experience of mine in particular stands out as an example of a grantee prioritizing a funder’s needs over their own. After a few exploratory conversations with a potential grantee, it became clear that our two organizations weren’t a good fit — their work didn’t engage substantively with any of our interest areas, and was generally outside of our funding purview. Over the course of a half-hour meeting, I explained that, while we found their work exciting in its own right, it didn’t align with our mission or objectives, and that a funding relationship wouldn’t be a good fit.

The development officer agreed, but still asked to submit a funding proposal, and promised that their team would develop an altogether new program to fit our mission and appeal to us.

It was a stark reminder that some non-profits will adjust their strategic priorities in order to procure funding when they need it — even if doing so ends up being detrimental to their overall objectives. As funders, our organization’s visions should never directly impact grantee work, and we should work to ensure that grantees don’t re-shape themselves in order to fit our objectives. This kind of thinking can only compromise a nonprofit’s impact and effectiveness, and preventing it requires lots of explicit communication.

Keeping everyone’s priorities clear and open can be a delicate balancing act, especially since the power dynamic inherent to the grantee-funder relationship can make grantees feel obligated to act on a funder’s feedback. In fact, funder-driven feedback was the driving factor behind another interaction that stands out as an example of firm grantee integrity. During a grantee’s board meeting, a request for bold ideas and strategic guidance prompted our chairman (then a member of this organization’s board) to propose a strategic initiative for their team to explore. A few weeks later, a member of the organization’s staff contacted me to explain that after some preliminary research, they’d come to the conclusion that the proposed idea wasn’t a good fit for their larger strategic plan, and that they wouldn’t be pursuing it further.

Not only did the grantee take the suggestion to heart, they performed due diligence to confirm it wasn’t a fit, and were clear and honest in stating that it wasn’t for them, even though the suggestion came from one of their key stakeholders. They stayed true to their own objectives, and didn’t modify them in order to indulge a funder.

Both of these anecdotes speak to the same fundamental truth: just because a donor or a funder thinks something is a great idea doesn’t mean a grantee should bend over backwards to justify it as a strategic fit. And under no circumstances does it make sense for a grantee to expand their focus in order to make needless accommodations.

As funders, we aren’t experts on the nuances of an organization’s day to day work. It’s our responsibility to be responsible stewards of our own missions by seeking partners and grantees who share our vision, and not by shaping existing organizations to fit a mold of our own making. 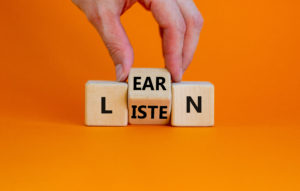